HOW HAS THE PANDEMIC AFFECTED THE LOSS OF PROFIT POLICIES? 21 September 2020 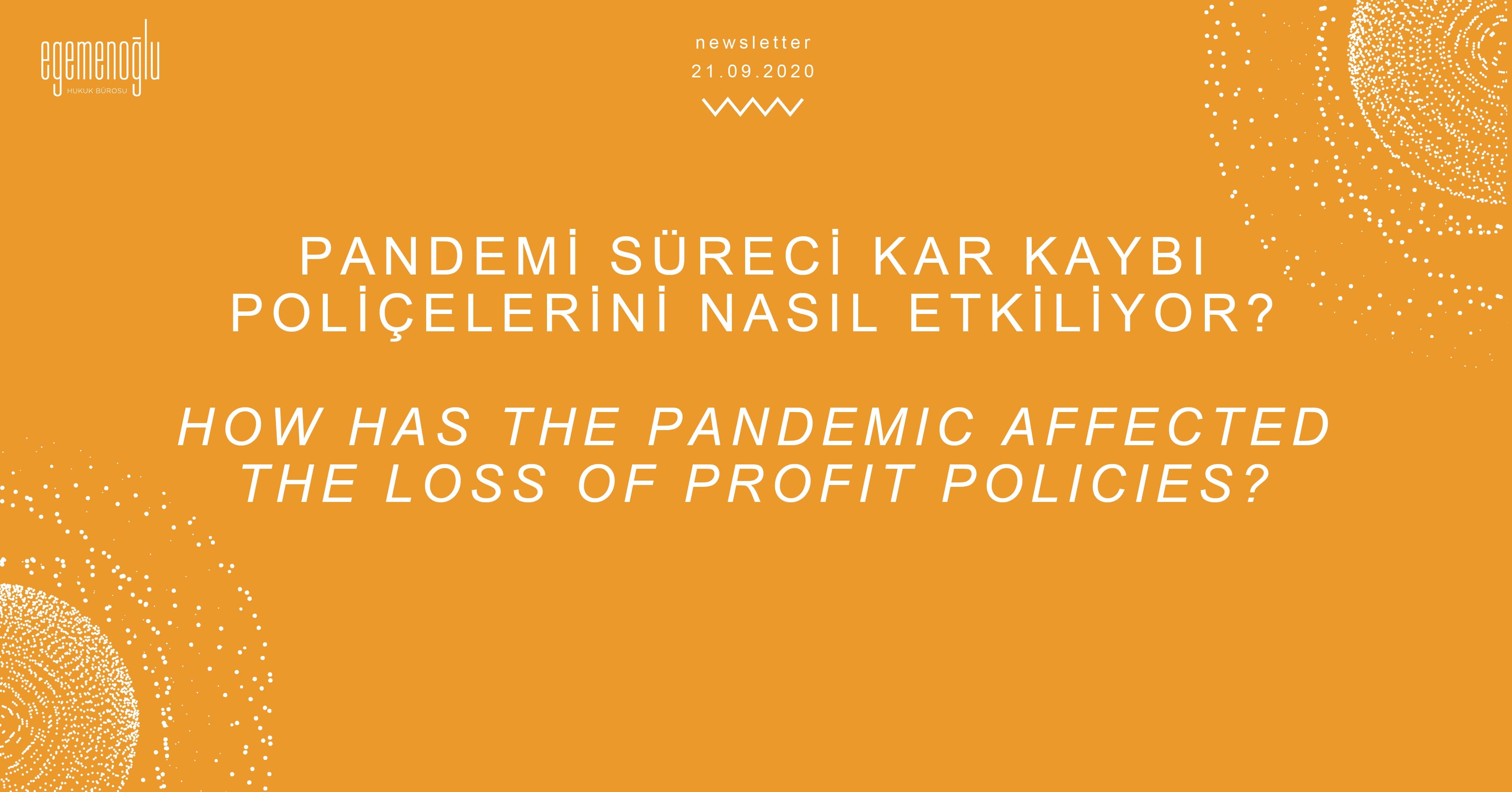 The epidemic we have been through lately has had a devastating impact on people’s social life as well as on commercial life, which causes some legal disputes to be resolved. Covid-19 epidemic disease, which started to be seen widely in our country since March 2020, has disrupted commercial and social life; and it has resulted in certain measures to be implemented in all areas of commercial and social life. The "curfew restrictions", one of the main measures in question, interrupted the commercial life and caused huge profit losses both for small businesses and companies.

Although public authorities try to help businesses with support packages, the magnitude of the economic loss incurred, has led businesses to investigate the loss of profit policies for compensating the economic damage suffered.

What is a Loss of Profit Policy and Which Situations Are Covered?

It is an undeniable fact that there is a very tight link between commercial life and risk. The activities of protecting machinery and equipment, movable and real estate assets or goods used in business activities against a risk that is possible to be met are called insurance. However, it is a known fact that standard insurance policies only cover material damages. In the event of deprivation of the expected profit as a result of stopping production or service for a while, in other words, loss of profit, replacing the diminished and lost liquidity as a result of continuing expenses is only possible within the scope of “loss of profit insurances”.

In order to apply for loss of profit insurances on behalf of compensation in accordance with Article 1409 of the Turkish Commercial Code, the risk that causes the damage must be clearly stated in the policy. Therefore, it is the generally accepted opinion that it is possible to apply to the insurer in terms of the risks written in the relevant policy.

However, Article 11 of the Insurance Law No. 5684, issued to regulate the insurance market, provides that all risks that are not explicitly excluded from insurance agreements are going to be considered within the scope of coverage.

The existence of these two different regulations brings along discussions. As a matter of fact, the risks that cause insurance payment in loss of profit insurances can be clearly counted in the policy, or they can be arranged in a way to cover all kinds of risks that are going to interrupt the commercial activity. In other words, coverage can be specified one by one in the policy, as well as situations that are not covered by the coverage.

However, in almost all insurance policies issued so far, it is seen that the covid-19 epidemic is not specifically included in the policy or that the policy has remained silent. According to the "named perils" principle adopted by the TCC, if the risk is not clearly stated in the policy or is not regulated as an exception, it shall not be possible to compensate for the damage due to the covid-19 outbreak within the scope of the risk. However, when the decisions of the Court of Cassation on insurance policies are examined in detail, it is seen that this silence is accepted as a silence that can be interpreted in favor of the insured, in cases where the scope of the policy is kept wide and the incident causing the damage is not clearly considered within the scope of exception. In cases where the relevant coverage is limited only to the realization of the written risks, it is seen that the Court of Cassation rejects the claims of the insured.

Consequently, the loss of profit policy is an insurance to provide compensation for damages in the case of a realization of risk which has already been specified in the policy. In accordance with the principle of ‘’named perils’’ which also has been accepted by the Turkish Commercial Code, risks need to be clearly stated in the policy in order to be able to compensate the loss. No loss of profit shall be possible to compensate if it is not clearly stated as a risk in the policy or if it counted as an exception under the policy.

Therefore, it is clearly seen that it is difficult to reach a clear conclusion on the subject. However, profit loss policies should be examined on a specific case, it should be determined whether the risk is within the scope of exception or whether the risk is clearly stated in the policy. As mentioned above, the silence in the policy shall be interpreted in favor of the insured, as well as an unfavorable result. It is beneficial for businesses to work with legal advisors on this issue, as each policy must be evaluated in terms of its specific and commercial activity.